Pattinson and Boland crunch NSW, spinner Holland out with concussion

New selector Tony Dodemaide saw exactly what Australia’s Ashes team will be missing with the retirement of James Pattinson, as he and the older but still available Scott Boland razed New South Wales on day two of the Sheffield Shield match at the MCG.

Dovetailing nicely with the nagging seam of Will Sutherland, Pattinson and Boland tied the Blues’ top order in knots either side of lunch, and then gained their due rewards in the final session as the visitors melted down to 9-139 in reply to Victoria’s 313. 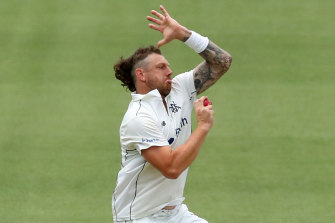 Boland and Pattinson claimed a combined 5-60 from 33 questioning overs, performances that would not have looked out of place in any of the Ashes Tests to come later this summer. At 32, Boland would be a mature age choice, but with 10 wickets at 10.6 in three innings so far, no-one is asking more questions of domestic top orders.

“I’ve been saying it privately to a few people but I wouldn’t swap him for just about anyone in the competition,” Boland’s coach Chris Rogers said this week. “He’s the finished article when it comes to his bowling, I think he’s taken another step, so if he was to be selected I’m sure he’d do a very fine job.”

Their efforts ensured Victoria did not overly miss the left-arm spinner Jon Holland, who was forced out of the game with a concussion after being struck on the helmet by Liam Hatcher early in the day. The wrist spinner Will Parker subbed in.

On a surface that offered a useful helping of movement off the seam all day, in addition to the odd delivery that would kick up at the chest of the batters, Pattinson showed precisely why Pat Cummins had tried to dissuade him from retirement, beating the bat more or less constantly.

With Boland hitting similarly exacting areas at the other end, neither Daniel Hughes nor Matt Gilkes ever looked comfortable, although the former scrapped his way to 59 as NSW stuttered to a reasonably placed 2-85.

Kurtis Patterson’s ill fortune, seeing a ball clip the bottom of his thigh pad and divert down onto the stumps when trying to glance Mitch Perry, signalled a sharp shift in proceedings, as the ball started to catch the edge where previously it had narrowly missed.

Hughes was run out in a disastrous mix-up with Jack Edwards, who was then squared up and nicked off by Pattinson, running in freely from the members’ end. Test aspirant Sean Abbott followed just two balls later, snicking another ball of perfect line and just enough seam, as the small but vocal crowd rejoiced in Pattinson’s celebrations.

Boland’s rewards arrived soon after, claiming Nathan Lyon on the hook and bowling Liam Hatcher, to leave Peter Nevill and last man Trent Copeland clinging on when heavy rain brought an early close to the day.