On a day of mixed feelings for the home nation, rookie Nans Peters won the eighth stage of the Tour de France following a long breakaway in the Pyrenees, while fellow Frenchman Thibaut Pinot’s love-hate relationship with cycling’s marquee event continued.

Peters was part of a group of 13 riders who broke away Saturday in the early stages of the 141-kilometer (87.5-mile) stage featuring three punishing ascents to the town of Loudenvielle, where he soloed to the biggest win of his career.

Pinot went into this race edition dreaming of ending a 35-year drought for France but lost contact with the main contenders 41 kilometers from the finish. It got worse and he dropped to 30th overall, 18 minutes and 56 seconds behind race leader Adam Yates. 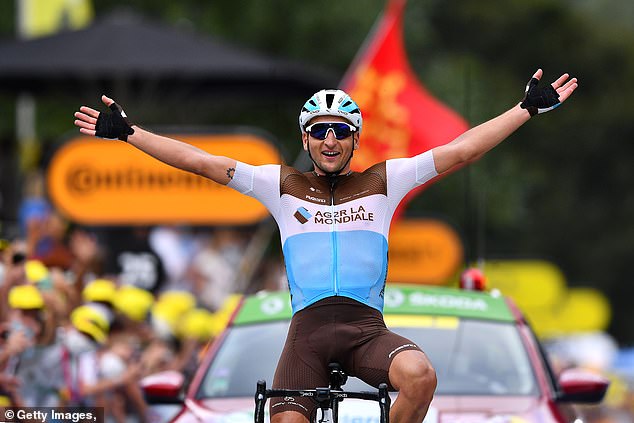 With his hopes of triumphing on the Champs-Elysees effectively ended for another year, the 30-year-old Pinot suggested he might never race the Tour again with the ambition of winning it.

“I could not pedal, that’s the way it is,” said Pinot. “I want to apologize to my teammates and all my supporters because it’s a huge disappointment. It might be a turning point in my career. I’ve been through too many failures.”

Pinot, a talented rider with flair and strong climbing abilities, has been hit by bad luck at the prestigious three-week races. A third-place finisher at the 2014 Tour, he has only finished the race once since then. He skipped it two years ago to focus on the Giro d’Italia, where he was forced to abandon because of pneumonia while fighting for the title. 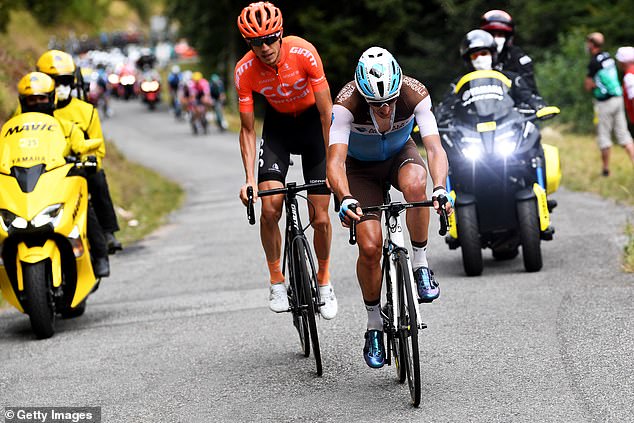 Back at the Tour last year, Pinot looked like the strongest climber in the Pyrenees but his remarkable ride ended in tears within touching distance of Paris. He was forced to abandon with a left leg injury.

This year, he arrived in great form on the back of a second-place finish at the Criterium du Dauphine but crashed during the Tour’s opening stage in Nice.

Frenchman Julian Alaphilippe, who wore the race leader’s yellow jersey for three days earlier in the race, also had a tough day and dropped to 26th overall. Unlike Pinot, Alaphilippe had no ambition in the general classification.

With Pinot out of contention, French hopes of producing a homegrown Tour winner for the first time since five-time champion Bernard Hinault last won it in 1985 rest upon Guillaume Martin and Romain Bardet, who respectively trail Yates by nine and 11 seconds. 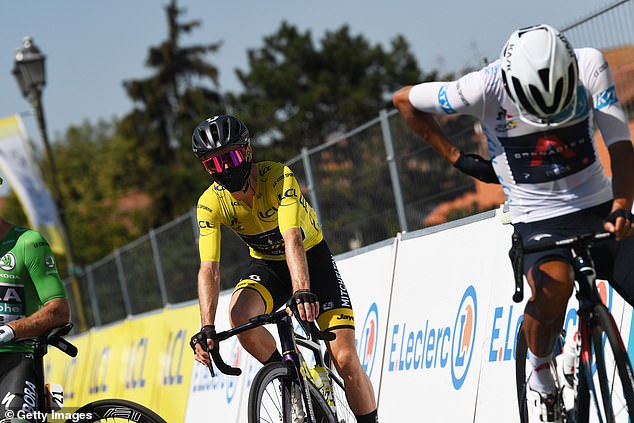 Yates came under a series of attacks in the final climb, the Col de Peyresourde, but hung on to the overall lead after Roglic did not seem interested in taking the coveted shirt this early in the race. Roglic responded to every attack in the last 4 kilometers and gave the impression he could have gone solo.

Overall, Yates has a three-second lead over Roglic, with Martin completing the podium six seconds further back.

The stage destroyed Pinot, who cracked in the Port de Bales.

Riding at the back with other contenders, Pinot, who did not fully recover from last week’s crash, was dropped in the day’s second ascent. He was accompanied by three teammates who gently patted him on the shoulders and tried to spur him on. Touching his lower back, Pinot could not react and reached the finish more than 25 minutes after Peters. 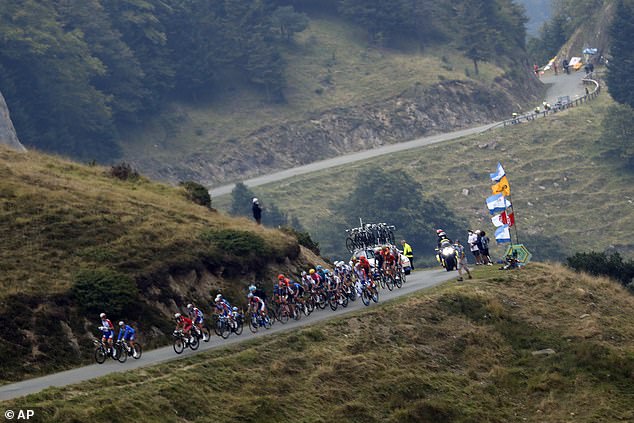 Another big loser was Tom Dumoulin, the Jumbo-Visma co-leader with Roglic, who was dropped on Peyresourde and lost more than two minutes on the favorites.

Ahead of another tough stage taking riders from Pau to Laruns, the Tour hierarchy is now clearer, with nine riders separated by just 48 seconds. Among them stands ninth-placed Tadej Pogacar, who moved back into contention after losing time in crosswinds the previous day. He regained 38 seconds with a late attack in the Peyresourde that was left unanswered.

“Roglic is one of the strongest rivals but Pogacar is also phenomenal,” Bernal said. “And there are (Nairo) Quintana, (Miguel Angel) Lopez, (Rigoberto) Uran… It’s going to be a very open and interesting race.”

The Tour, which was postponed from its usual July slot due to the coronavirus, ends in Paris on Sept. 20