‘Plenty of people said I was out of form’: Smith century silences critics

All is as it should be with Steve Smith back scoring centuries in Australia, and the superstar batsman says he never felt like he was out of form.

A fired-up Smith toasted a drought-breaking first Test hundred on home soil in more than three years and a world-record equalling eighth against India before a crowd of 9052. 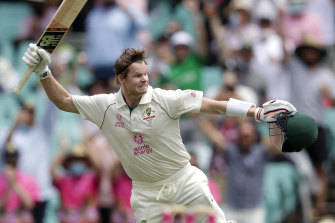 Steve Smith celebrates reaching a century on day two of the third Test.Credit:AP

But the third Test is evenly poised after Tim Paine's side blew a chance to plant its flag at the SCG with a commanding first innings total on Friday.

Having held Australia to 338, India will resume in a decent position on the third morning at 2-96, trailing by 242, after senior Indian batting duo Cheteshwar Pujara and Ajinkya Rahane survived a tense final 45 minutes late on day two.

Certainly, it's one they would have taken when they had been on the back foot as Smith moved towards his 27th Test century and his first in 15 Test innings, a veritable eternity for him.

Not since the No.4 batsman was stripped of the captaincy had he saluted in a Test in Australia and the emotion poured out of him in a celebration so robust he almost slipped over taking his helmet off and pivoting towards the change room.

While he was his otherworldly self in the Ashes 18 months ago, the year 2020 was about as good to him as everyone else. He played only three Tests in the year of the pandemic but managed just 73 runs at an un-Smith average of 18.25.

Armed with a tighter grip after struggling in the first two Tests of the series, he has done his part to restore a modicum of order amid the uncertainty all around.

"Plenty of people said I was out of form, so it was nice to come back into form if that's what you want to call it," Smith said.

"It was only about three or four weeks ago that I scored two [one-day international] hundreds at the SCG. I've missed out in the first two Test matches obviously and came back today and scored some runs and helped put us in a decent position."

Australia's failure to cash on Smith's ton, however, threatened to come back to bite them, with the 31-year-old running out of partners before being run out for 131.

Smith's stunt double from that remarkable last Ashes series, Marnus Labuschagne, didn't deserve to be an afterthought, falling nine runs short of a second straight SCG century, but the former leader can do that. The Queenslander has been the most consistent Australian batsman during this series and, with debutant Will Pucovski and Smith, he laid the groundwork for what had the makings of an imposing total.

As it turned out, Australia squandered the chance to set one of those, losing their final eight wickets for 132 on day two after being 2-206 with Smith and Labuschagne in the middle.

Matthew Wade, back at a more familiar No.5, was as responsible as any for the missed opportunity, with a careless stroke exposing young Cameron Green to Jasprit Bumrah and a second new ball.

"It's not ideal but guys aren't trying to get out," Smith said of the wickets he watched fall at the other end. "They're trying to do their job. It wasn't great but we keep moving forward."

Australia hadn't reached 200 in their first innings so far this summer and, for a time, it seemed they might not make 300 here on a more accommodating pitch. Some lusty shot making down the order from Mitchell Starc (24 not out) at least helped Smith take Australia beyond that mark.

While the hosts were guilty of profligacy, Bumrah and India's jack-of-all-trades, Ravindra Jadeja, also deserved credit for them coming up short. Jadeja excelled with the bat in Melbourne to help set up an Indian win and starred with the ball and in the field in Sydney on Friday, taking 4-62 before throwing down the stumps to catch Smith short.

India began well with the bat but Australia's bowlers were, as usual, outstanding. Josh Hazlewood removed the returning Rohit Sharma for 26 with a sharp catch in his follow-through and Pat Cummins ended Shubman Gill's impressive outing on 50 via a low catch at gully by Green.