Ricky Ponting’s first Test in Perth since Justin Langer’s exit as Australian coach looms as a vital ingredient to ease any lingering tensions between past and present cricketers, as broadcasters, players and staff mix together during the series.

From his commentary post, Ponting saw the writing on the wall for Justin Langer’s tenure in the job mentoring the men’s team well before his close friend and former teammate did. 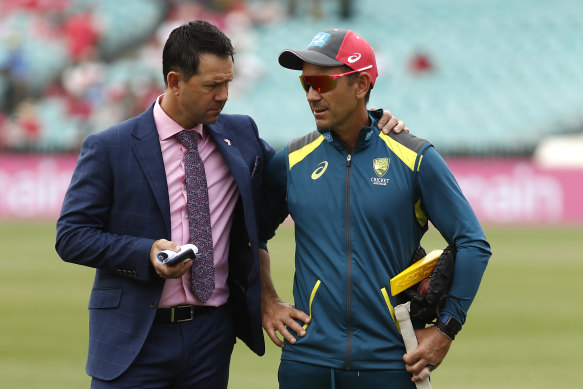 In an interview published by News Corp on Wednesday, Langer claimed he had been left blindsided, thinking he was doing all the right things as coach, before stories began emerging about how the team was being worn out by his mood swings and volatility.

The interview further inflamed the intergenerational feud in Australian cricket.

Ponting and Langer will be central to Seven’s coverage of the men’s Tests and Big Bash League matches this summer, and their rare understanding is widely seen within cricket circles as key to ending a war footing between the playing fraternity.

In addition to their playing and broadcasting partnerships, Ponting has worked alongside Langer within the Australian team environment during his time as coach, a vital insight many other past players are lacking.

“Punter kept JL very even,” one current player told The Age and The Sydney Morning Herald.

Langer and Cummins have been in communication for some weeks, and the publication of the interview has not ended the chances of that dialogue continuing in person around the Test match.

Cummins’ private meeting with Adam Gilchrist in Adelaide, another player regarded by Langer as part of the “fabric” of Australian cricket, was significant given the former wicketkeeper’s closeness to the ex-coach and failed public advocacy for a long-term contract extension.

Another member of the coaching group on the 2019 World Cup and Ashes tour of England, Brad Haddin, has stated that private talks between Langer and the current players may be necessary to end a cycle of negativity that reached a new peak with the podcast interview excerpts published with great fanfare by News Corp this week.

“This is just a really ugly situation,” Haddin told Triple M. “This has been going on now for some time, this has been going on for over 12 months. That takes it to a new level. Obviously at some stage during his tenure he lost the change room. Whatever opinion you have on that, that’s happened, that’s fact.

“But to have this still going on after 10 months, this is a guy that’s played 100 Tests for Australia, he’s been a very successful coach. Yes it ended messy and by the looks of it there’s still a lot more to come out.

“I don’t know where they go from there, what they want the end game to be. Do we want to play this out in the public is it time they do get behind closed doors and really nut this out, because we all love the game and this hasn’t been going on for a couple of weeks. There’s obviously a lot of tensions there, and maybe this can be the catalyst to end it.”

As much as Langer struggled at times to process the feedback presented to him on multiple occasions – via two independent reviews and other means over most of his four years in the coaching job – Ponting was more perceptive of how the team was struggling to evolve from the dynamic that existed after the 2018 Newlands scandal.

On the Saturday when Langer’s resignation was announced in February, Ponting was coincidentally doing a radio interview with the ABC, and among other things talked through his vexed position as a close friend but also a sharp observer.

“I am very close to Justin, we’re like brothers,” Ponting had said. “But I’ve not got too heavily involved in this because … there’s no way that I could change the way that this looked like it was heading.

“What’s happened today, I’ve sort of felt that has been heading that way for quite a while.“

A likely feature of Seven’s coverage will be numerous occasions where Langer, Ponting and Matthew Hayden, their fellow batting “engine room” member of one of Australia’s greatest Test teams, sit together to discuss their playing and post-playing days.