Sixers quick Gurinder Sandhu has expressed his disappointment over news Sydney Big Bash League games could be relocated due to the Avalon COVID-19 cluster, saying a grand final win for his club would be made "less special" without home crowds.

Sydney is set to host eight BBL games in January at the back end of the season with the fixtures increasingly under threat due to the recent outbreak in the northern beaches. The first match was set to be a Sydney derby against the Thunder on January 13 at Sydney Showgrounds Stadium. 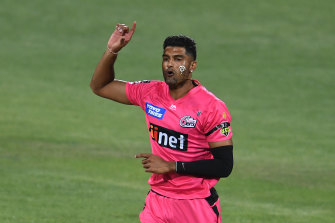 Sixers fast bowler Gurinder Sandhu has expressed his disappointment over news Sydney Big Bash games could be relocated amid the Avalon clusterCredit:Getty

On Sunday, the Sixers claimed another victory, this time against the Adelaide Strikers, where Dan Christian claimed the second-fastest half-century in tournament history.

The Sixers are hoping to keep the momentum going for their Boxing Day match-up against the Stars.

"We're just really, really hoping that, come the new year, we can have some home games, and really give back to the fans for their support," Sandhu said.

The fast bowler is hoping to make a name for himself once again after an injury in 2019 saw him delisted from both a state contract and a BBL contract with the Thunder.

Sandhu was brought into the Sixers squad as a local replacement for Mitchell Starc while the superstar is on Test duty and is hoping to make the most of his time with the club.

"For me personally, last season was a tough one," he said. "I was just trying as hard as I could and preparing the best I could to be ready for an opportunity like this and thankfully, it came.

"So far I've had a really, really good start. So I'm happy with where I'm at personally."