Extra rigour has been added to the search for the next Australian men’s captain, in contrast to a September 2018 Cricket Australia leadership process where the integrity investigation of former skipper Tim Paine, just a few months before, was never mentioned.

The nominations of national selectors George Bailey, Justin Langer and Tony Dodemaide – widely expected to be for Pat Cummins as captain and Steve Smith as his deputy – were decided this week. 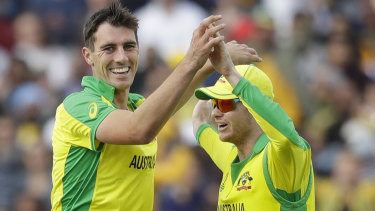 Pat Cummins and Steve Smith are the two likely nominees for captain and vice-captain of the Australian men’s team.Credit:AP

A joint committee comprising selectors, CA’s chief executive Nick Hockley, chair Richard Freudenstein, and fellow director Mel Jones, will now look into the nominees before they go to the full CA Board, in a process that may take up to a week.

It is expected that all captaincy nominees will be interviewed by the joint committee, providing them the chance to articulate their personal histories, and also their vision for the Australian men’s team.

Committee members will also be collectively briefed on relevant integrity or code of conduct matters that have not been published, should nominated players have any such issues as part of their time in cricket.

Sources revealed to The Age and The Sydney Morning Herald that a panel convened specifically to settle upon the leadership of the Australian men’s team in late 2018 never discussed Paine’s integrity investigation for sending an explicit image and messages to a former Cricket Tasmania staffer, despite multiple panellists being aware of the matter.

But the Paine episode was never shared with all members of the panel, meaning it could not be spoken about in the context of his leadership of the men’s Test team.

Langer had instituted a method of identifying leaders that he had seen at the West Coast Eagles football club, where he remains a board director. This involved asking current players to vote on who they saw as the team’s leaders, with the top six placegetters then interviewed by the panel before final decisions were made.

While first appointed captain immediately after Steve Smith’s forced resignation as leader amidst the Newlands ball tampering scandal in late March of 2018, Paine described himself as putting his name “back into the pool” for this process, similarly to a political leader declaring the leadership vacant ahead of a party room vote. 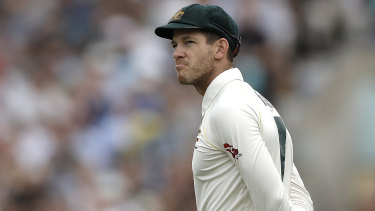 After being re-nominated as captain, Paine denied it had been a box-ticking exercise, and affirmed his willingness to stand aside if his fellow players or the expert panel had decided he was not the right candidate.

“It probably wouldn’t have been my call. We took it very seriously and the players had their say, then there was a [interview] process after that as well,” Paine said in September 2018. “It was not done to tick boxes or anything like that. It was to make sure we had the right people leading this team going forward.”

The nomination of a wider group of leaders – Cummins was not included as he was recovering from a back injury at the time – was aimed at adding to the leadership options available to the national selectors in all formats.

Mitchell Marsh and Josh Hazlewood were named as joint vice-captains to Paine, while Aaron Finch, Alex Carey and Travis Head were also high in the voting and served as titled leaders at various points of the following summer.

“We believe the new leadership model will best support the captain,” Hohns said at the time. “It is a successful model used across various sporting codes around the world, and we see it benefiting the group, not just from a tactical perspective, but also to help drive the team’s values and standards on and off the field.”

Given how publication of his explicit image and messages to the former staffer carried the potential to render Paine’s captaincy untenable at virtually any time after that point, the deeper pool of leadership options was not only preferable but essential.

The current process may involve as few as two players, but the questioning will be deeper.

“We’ve put in place a process for finding the next Australian captain that was going to take place over the summer in anticipation Tim would one day retire,” Freudenstein said on Saturday.

“We’re obviously accelerating that process. It’ll be a very thorough but brief process that will look at all the relevant criteria for a captain of the Australian cricket team. We will come to a conclusion with plenty of time before the Ashes.”