Rachael Blackmore strengthened her lead in the race to be top jockey at Cheltenham with victory on Telmesomethinggirl in the Parnell Properties Mares’ Novices’ Hurdle at Cheltenham.

It was her fifth of the week and second on the day after winning the Ryanair Chase on Allaho.

Like Allaho and Honeysuckle in the Champion Hurdle on Tuesday, Telmesomethinggirl was trained by Henry de Bromhead. The County Waterford-based trainer was also responsible for the runner-up Magic Daze, who made the running and did not give up when headed.

However, Robbie Power’s mount had no answer to the finishing flourish of Telmesomethinggirl (5-1).

Bounding up the hill, the six-year-old took the Grade Two contest by five and a half lengths from her stablemate. Mighty Blue was a length and a half away in third place. 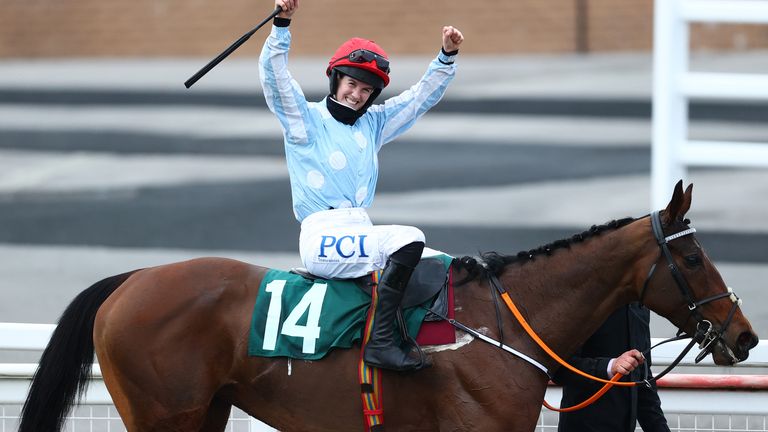 “Henry’s done an unbelievable job with her, he always thought a lot of her and she showed it today. She’s got speed as well as everything else, she jumped brilliantly everywhere and she settled better than she had done before.

“I wish I could give you something really good, but I’m genuinely just so overwhelmed by these last few days. It’s all about the horses you’re getting on and I’ve just been so lucky to be riding for the people I’m riding for.”

De Bromhead said: “It’s been an incredible week. The horses are flying, the jockey is flying and it’s been brilliant.

“We’re very lucky to have good mares like these and good owners.

“I thought this mare had a chance. I thought on ratings we might struggle a little bit, but I thought both of ours had a squeak.

“Magic Daze ran a cracker as well to finish second, having made all, which is a hard thing to do in this race.

“I’m delighted with both of them.”