‘That would be ideal’: Carey open to delayed Cup so fans can attend

Australia's Twenty20 vice-captain Alex Carey says it would be "ideal" if the World Cup was pushed back in order for fans to attend the tournament.

Just over six months before the event is due to start, there are huge doubts as to whether it will go ahead as planned due to travel restrictions in place to restrict the spread of coronavirus. 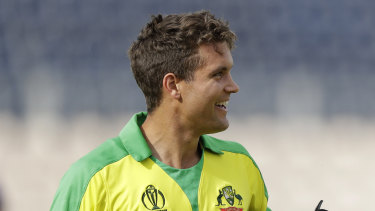 Alex Carey would like to see fans able to attend the Twenty20 World Cup this year.Credit:AP

The International Cricket Council is still hopeful the event can run to schedule but the movement of 15 teams around the world presents a logistical nightmare for tournament organisers.

If the World Cup is to be held in its original timeslot, there is a strong likelihood it will be played before empty stadiums. Carey would prefer to see the tournament pushed back so the fans can sit in the stands but understands the difficulties confronting cricket authorities.

"That would probably be the ideal situation. If you can put a date on it – it's probably hard right now to say if we postpone the T20 World Cup then three months later it'll be fine to open the gates," Carey said.

"So I trust the guys – well above my head – to make the right decisions. Like I said, I'll do absolutely everything I can to support that and hopefully I'm there if the T20 World Cup does go ahead."

Carey played in the one-day international game against New Zealand last month at the SCG, which was closed off to fans.

Australia are one of the favourites to claim the title and follow in the footsteps of the women's side, who lifted the trophy last month in front of more than 86,000 fans at the MCG.

"If it doesn't go ahead it's going to be disappointing for myself and a lot of other people who would love to watch the T20 World Cup," Carey said.

Carey was to join forces with Ricky Ponting in the Indian Premier League after being bought by the Delhi Capitals for $470,000 but the lucrative Twenty20 tournament has been postponed indefinitely.