More positive COVID-19 cases on Wednesday than fans at SCG

More people tested positive to COVID-19 in NSW on Wednesday than there were fans on the first day of the Sydney Test, as player anxiety grows over the ballooning cases in the Big Bash League.

It was a case of another day, another COVID drama for Cricket Australia, which is showing the flexibility of an Olympic gymnast in keeping the show on the road during the peak holiday period.

But the strain is starting to show across the sport after a day in which 12 Brisbane Heat players return positive PCR tests, forcing CA to again postpone the rescheduled clash between the Heat and Sydney Sixers. There is likely to be more disruption, with a Melbourne Renegades player producing a positive rapid test.

The Sixers squad all underwent PCRs on Tuesday after a coach tested positive, though results that had come through by Wednesday afternoon were all negative.

It brings to 33 the number of players in the Big Bash League and Ashes who have tested positive, and there are a further 16 cases among support staff and their families. 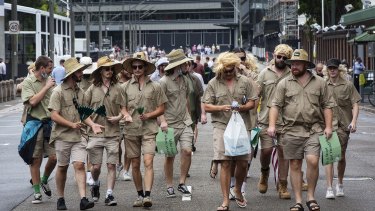 Crowds gather at the SCG on day one. Credit:Jessica Hromas

How many first innings runs can Australia make?

How day one unfolded

Just when it appeared England were suffering from a severe bout of Departure Lounge Syndrome to go with the lingering COVID crisis, they staged a stirring fightback on the opening day of the fourth Ashes Test in Sydney.

Late wickets to the ageless Jimmy Anderson and unsettling Mark Wood left the match evenly poised with Australia 3-126 as yet another shower of rain brought an early stumps on Wednesday.

The stage is now set for Steve Smith (6 not out) and Usman Khawaja (4 not out) to make triumphant homecomings when they resume on Thursday.

Smith has made just one century since his prolific return from suspension on the 2019 Ashes tour, 131 at the SCG against India a year ago.

And Khawaja, who made his Test debut at the ground as a NSW player before moving to Queensland, is playing his first Test since being dropped on that 2019 tour as a replacement for the COVID-19 stranded Travis Head.

During the previous Ashes Test at the SCG four years ago he scored 171.

Welcome back to the cricket

Welcome back to our live coverage of the fourth Ashes Test at the SCG. It’s Tom Decent here once again in the blogging chair, ready to run through another day of action.

Australia resume day two on 3-126 after just 46.5 overs of play due to incessant rain. The weather forecast looks a little better today, so we shouldn’t see too many breaks in play (touch wood).

Play has been moved forward half an hour to make up the time, so ball one – provided a thunderstorm doesn’t hit, as could be the case – will take place at 10am. 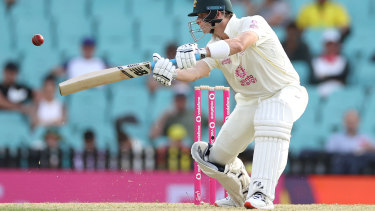 Steve Smith bats at the SCG on day one. Credit:Getty