Tim Paine drops a catch during the third Test 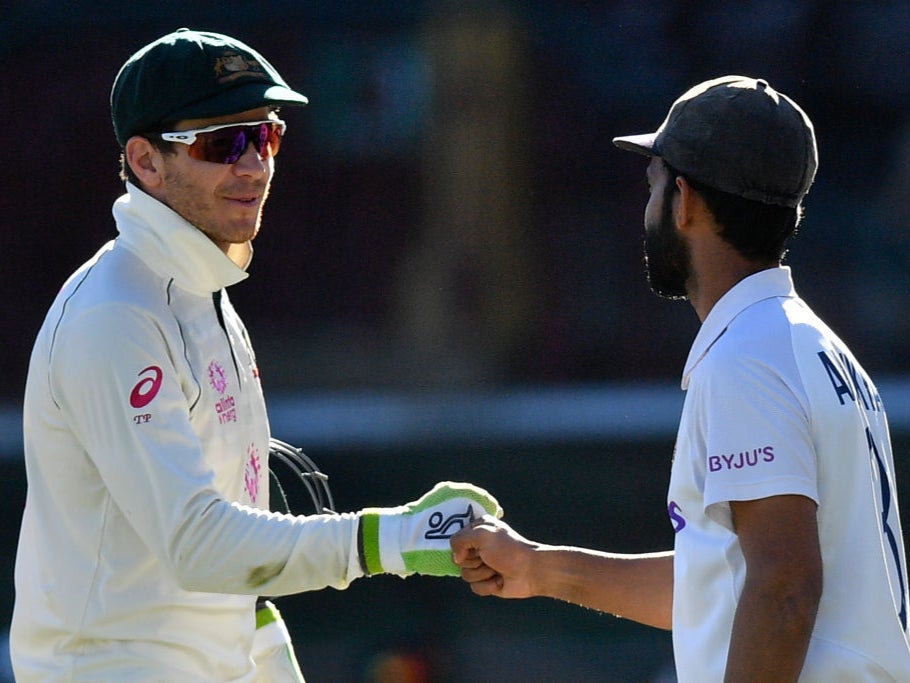 “He carried himself with the dignity of a captain, but was going to stand toe-to-toe and stare down Virat Kohli,” said SEN’s marquee broadcaster Gerard Whateley. “When Virat Kohli was dismissed in that fourth innings, Tim Paine was able to stand there and declare the new Australia.”

Fast-forward two years and, as another Australia-India series reached fever pitch, Virat Kohli is nowhere in sight. Instead, he is back home on Daddy Day Care duties after the birth of his daughter. Paine’s battles are now being fought off the field to salvage the goodwill he built back up from Cape Town, not just that week in Perth just over two years ago.

On the final day of the Sydney Test, India’s valiant rear-guard to keep the series 1-1 going into Friday’s decider in Brisbane was scored by Paine’s chat into the stump microphones. Frazzled and out of ideas, he set about trying to flap the unflappable Ravichandran Ashwin.

Ashwin replied, stone-faced: “Just like we want to get you to India. That will be your last series.”

Paine: “Maybe. Are you a selector here as well? At least my teammates like me, d*******. I’ve got a lot more Indian friends that you do. Even your teammates think you’re a goose, don’t they? Every one of them.”

The “conversation” continued, but that was the gist of it. It did the rounds on social media, picking up enough traction – and then some – that Paine subbed himself in for media duties the next day

“I want to apologise for the way I went about things,” he said. “I’m someone who prides themselves on the way I lead this team and yesterday was a poor reflection of that. My leadership wasn’t good enough, I let the pressure of the game get to me, it affected my mood and from there affected my performance.”

Paine’s language was off, but nothing more. No worse than Jos Buttler calling Vernon Philander a “f****** d*******” during England’s Test in South Africa this time last year. Keepers chat rubbish, that’s part of the deal. The difference is Buttler has never presented himself as being a bastion of cultural change. And thus, not subject to the same calls of hypocrisy as Paine.

There’s a lot of this which is not of Paine’s making. When you are pitched as an antidote to toxicity, in a documentary that carries tinges of propaganda, you will be judged by those standards, whether you want to or not. But it’s hard not to think it’s the former given the crux of Paine’s chat has been around popularity. I’ve got mates, you don’t.

He is probably right, to be fair. In high places, too, which is how he can command a place without being held to the same standards as others. Of course, he is a fine keeper: CricViz has calculated he has taken 90 per cent of his chances since returning from the wilderness for the 2017/18 Ashes. In those 58 innings, he has only missed 12. But no established keeper averages as low as his 27 since August 2018. The issues many have with the 36-year-old is not simply that he has been anointed as the saviour, but that he continues to benefit from it.

Has the mask slipped? It’s not quite that simple. Under Paine, Australia’s on-field behaviour has changed. There have been moments this week, such as taking an active role as a Cricket Australia conduit between the organisation and the India team after reports of racial abuse from the stands. Previous Australia captains may not have been such a willing assistant in an investigation against their own crowd.

But there is a sense Paine is losing control – of himself and the narrative. That was reflected with some questionable tactics on the final day at the SCG, and compounded by three drops that could have had Australia going into this final Test with a 2-1 lead.

You could argue he is well-placed for these stresses. Beyond never being ordained as a future Australian captain, he was rarely indulged as a cricketer. A job at Kookaburra was awaiting him before his second-coming. Thus, unlike most of his contemporaries, he carries an attuned gauge on what real-world pressure feels like, even if he has benefitted from plenty of goodwill.

As it happens, Paine saw this period coming:

“We know we’re going to be closely watched,” he said during The Test. We know we’re probably going to be harshly dealt with from a media point of view, particularly foreign media. And we know that some of those people are looking for us to slip up.”

He was right. And that the moment, and whatever subsequent work done, has been lost. Maybe not to his teammates, maybe not to Australian supporters. But to everyone else. Mixed in with Steve Smith’s scuffing of the crease (no big deal) and allegations of racism from fans (quite a big deal), untold judgements from India, as another nation wades while sharpening their tools ahead of an Ashes at the end of the year, this was the return of the Bad Old Australia. The Australia many felt never went away.

In Jon Ronson’s So You’ve Been Publicly Shamed, a book about online shaming, Mike Daisey is a writer caught lying about his findings while reporting on Chinese factories that manufacture Apple products. As he talks of how he coped with the reaction against him, he happens upon a realisation.

“I’d never had the opportunity to be the object of hate before,” he says.” The hard part isn’t the hate. It’s the object.”

Well, Tim Paine is now the object, even though he should be credited for actively trying to temper the hate. No Amazon production magic can change that, even if there is a happy ending in Brisbane.