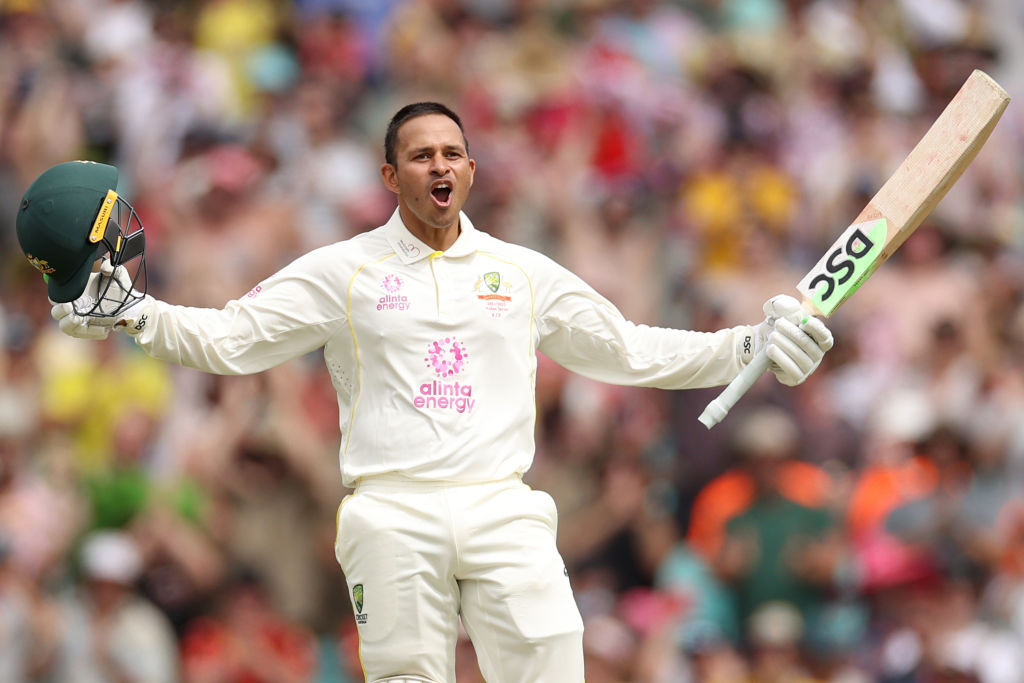 Usman Khawaja scored a superb century to put Australia in control of the fourth Ashes Test against England, and was even able to pay tribute to one of his sporting heroes in the process.

The 35-year-old was supported by Steve Smith (67) and Mitchell Starc (34 not out) as the hosts made England toil on day two in Sydney, despite Stuart Broad’s 5-101.

Khawaja said: ‘The celebration? I was so excited! I love Lebron James and I do it mucking around with the boys all the time.

‘If I hit a few good shots playing basketball I do it so I’ve had a bit of practice at it.’

This was Khawaja’s eighth Test century in 45 games since making his red-ball debut for Australia at this venue and against this opposition. He also made a century in Sydney during the 2017-18 Ashes.

After Australia posted another big total, England will have to perform with the bat to at least secure a draw in the rain-affected Sydney Test and prevent an Ashes whitewash.

Joe Root’s side will resume day three on 13-0 after opener Zak Crawley was offered a reprieve when he edged Mitchell Starc behind off a no-ball.

Speaking at the close of play, Broad – who took his 19th five-wicket haul in Test cricket – said: ‘It was Australia’s day, no doubt about it. I thought that Khawaja played beautifully. He gave us one chance that we didn’t manage to grab hold of.

‘We are still in this game and it makes tomorrow a really important today. We always think day three is a really important day in Test cricket, but it is a good opportunity for a batting group that hasn’t stamped their authority on this trip to do it.’