Humidor, the horse that pushed Winx further than any other during her four straight Cox Plate wins, has booked his place in this year's weight-for-age championship race.

Rarely does Chris Waller show emotion but, watching on from Randwick, the champion trainer cheered as Winx's greatest nemesis turned back the clock with a stunning win in the Feehan Stakes.

Humidor, twice placed in a Cox Plate behind the champion mare in 2017 and 2018, was overlooked at the selection table for last year's race by Moonee Valley's race committee in favour of three-year-old Castelvecchio, who eventually finished runner-up to Lys Gracieux. 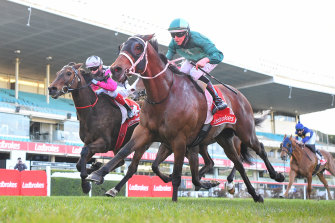 For his third stable since his last win – more than two years ago in the 2018 Memsie Stakes – Humidor started $18 in his first race under Waller and when leading chances Harbour Views, Sircconi and Surprised Baby loomed to fight out the finish in Saturday's group 2 Feehan Stakes, it was the old boy – at the ripe age of eight – who stormed through the middle and won his way into next month's Cox Plate under last year's winning jockey Damian Lane.

"I tried to buy [him a few years ago] and I was miserable when I didn't get him," Waller recalled.

"They wanted $1 million for him and I said $975,000. They said we will get back to you and then rang back and said Darren Weir has bought him.

"I was shattered because I loved the horse and he is from where I'm from in New Zealand.

Waller said he never gave the horse a chance to disappoint after the horse landed in his stable.

"They rang and said they want to give the horse one last chance. We had a think about it but because of that association I wanted to give him one last chance," he said.

"Since he arrived we have just gone back to basics with him, no fuss, and [Melbourne foreman] Jo [Taylor] has done a great job with him."

Surprise Baby and Harbour Views finished second and third respectively, both finishing within half a length of the winner.

Meanwhile in the group 2 McEwen Stakes, group 1 winner Bella Vella stamped her class with a gutsy win over 1000 metres.

The Adelaide star, a winner of the Sangster Stakes at her most recent start, got a beautiful run in transit under Jamie Kah but was thrown down a challenge by outsider Ashlor.

Yet Kah lifted the mare in the dying stages to snatch victory, with three-year-old filly Brooklyn Hustle closing for third and colt Hanseatic in fourth.

"I'm a bit emotional after that," trainer Will Clarken said.

"She's a horse to fall in love with. She has heaps of ability but I just admire how tough she is and how hard she tries. She delivers 10-fold."

Kah couldn't have been more proud of Bella Vella, who has stamped herself as a leading contender for the group 1 Moir Stakes over the same track and distance in three weeks' time.

Brooklyn Hustle and Hanseatic will also head towards the Moir.

Earlier, Night Raid claimed the listed Atlantic Jewel Stakes to establish herself as an early $10 equal-favourite for the Thousand Guineas.

Meanwhile, veteran jockey Dwayne Dunn was taken to hospital following race four after Shot Of Irish jumped in the barriers, causing Dunn to hit his head on the gates.