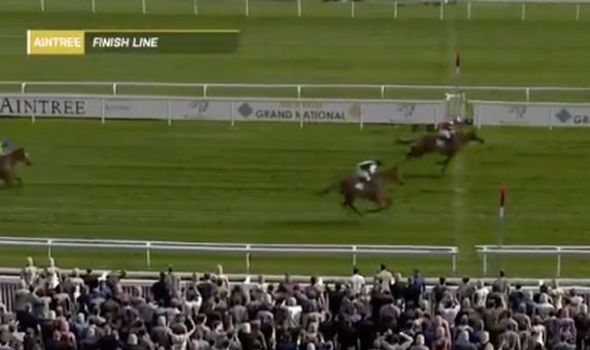 Potters Corner stormed to victory during the Virtual Grand National, rode by Jack Tudor who would have become the youngest winner since 1938, as Tiger Roll faded after the last fence. The 18-1 winner finished ahead of Walk in the Mill in second and Any Second Now in third.

Tiger Roll has looked in control after 66-1 shot Aso suffered a nasty fall on the penultimate fence.

But in the end he couldn’t go the distance and finished fourth behind Potters Corner in a disappointing collapse.

The virtual race took centre stage with the real race at Aintree having to be postponed due to the coronavirus.

And it was made even more significant by bookmakers coming together to donate all profits to the NHS to help them battle the pandemic.

Result of the 2020 Virtual Grand National

A big increase in deaths in the UK were announced just hours before the computer generated race got underway – with the UK death toll up to 4,313 as of Saturday morning. A five year-old boy became the youngest person to die in the UK.

But the sight of some live action on TVs across the country – with the race broadcast live on ITV – offered some light relief during the UK lockdown.

Stakes for punters were limited to £10 with Tiger Roll the big 5/1 favourite after winning the Aintree race in 2018 and 2019.

The odds on all 40 runners were released on Wednesday and have remained the same across the board, allowing those having a bet piece of mind that the result had not been leaked beforehand.

However there was a word of warning from AmericanGambler.com early on Saturday that if Tiger Roll was to win the NHS would gain ‘next to nothing’ from the race due to the high volume of bets on the favourite.

Alexander Kostin said: “The decision to run a virtual Grand National as a substitute for the ‘real deal’ is a great initiative and especially as bookies have agreed that all profits from punting on the race will be donated to the NHS.

“However, with Tiger Roll being such a strong favourite, one can only hope that the people behind the algorithm have decided on an outsider to win, like Double Shuffle at 100/1, as otherwise, NHS Charities Together are likely to receive next to nothing, which would be a heart breaking outcome for such a great initiative and cause.”

Earlier in the Race of Champions Red Rum came out on top ahead of Manifesto with Tiger Roll in third.

Speaking ahead of the event, Betting and Gaming Council chief executive Michael Dugher said: “I am delighted that our members have stepped up in this way to support the national effort to combat Covid-19 by contributing all of their race profits to NHS Charities Together.

“With the UK understandably and rightly in lockdown, unfortunately the Grand National can’t take place.

“The virtual Grand National will be the closest we can get to creating one of those moments when we can all come together in celebration, not just for the world’s greatest sporting events, but for the NHS heroes working on the front line to keep us all safe.”

“Millions of us love a flutter on the Grand National. For many, it’s the only time of the year they place a bet. This year, the big winner will be our NHS.”