The BBL top five is almost set after the Adelaide Strikers defeated the Melbourne Stars by 23 runs at Adelaide Oval on Saturday.

The bonus-point result moved the Strikers up to fourth on the ladder and opened up a six-point gap between fifth-placed Hobart and the bottom three.

Time is running out for the Stars who have slipped six points adrift of the finals spots, and only have two more games in hand, while the result ended any hope the last-placed Renegades had of making the finals. 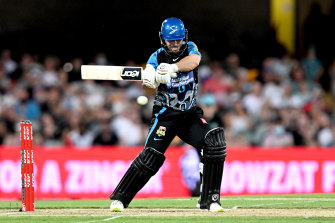 The seventh-placed Brisbane Heat have the best chance of replacing one of the top-five teams, considering they still have three games to play. Their meeting with the Stars at the MCG on Sunday night now looms as a do-or-die contest.

After being sent in by Stars captain Glenn Maxwell, the Strikers, led once again by the red-hot Jonathan Wells, posted 6-155 against a Stars bowling attack missing gun imports Haris Rauf (Pakistan Super League) and Qais Ahmad (international duty), who have departed the tournament.

Wells continued his brilliant season, scoring his third 50 after cracking 73 off 49 balls, including six boundaries and a six. Only Hobart’s Ben McDermott (513) has scored more runs than Wells (382) this summer.

In reply, despite Hilton Cartwright’s (49 off 35) best efforts, the Stars, playing their fourth game in six days, never got going, slumping to 4-37 in the seventh over, and losing 3-6 in eight balls late, to finish 8-132.

Strikers paceman Henry Thornton, playing his first BBL season in five years, continued to make the most of his second chance, tearing through the Stars’ top order and finishing with career-best figures of 4-26, including the big scalps of Maxwell and Cartwright.