The problem with the dick pic is that once the cat is out of the bag – so to speak – it’s almost impossible to get it back.

The dick pic has shredded the reputations of many men, from politicians to gazillionaires, and now it’s shredded Tim Paine, the poster boy for “cultural change” in the aftermath of the Newlands ball-tampering scandal.

Paine can make a mistake. He’s a man, after all. We often do really dumb things, regardless of the consequences, regularly let down by the little batsman below.

The people who have really botched this is CA and the highly paid administrators who don’t seem to learn from past mistakes.

How CA retained Paine as captain just two Tests into his tenure, knowing a ticking timebomb was lurking in the background, ready to detonate at any moment, all the while trying to restore pride in the baggy green, is breathtaking.

The timeline here is important. 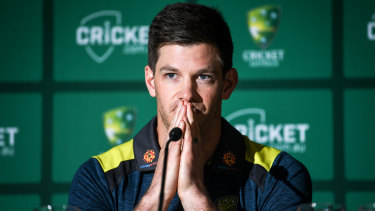 Tim Paine soon after his elevation to the Test captaincy in 2018.Credit:Justin McManus

Paine was officially made captain in late March 2018. In May that year, a former Cricket Tasmania staffer made a complaint about a lewd exchange between the pair in 2017.

CA’s integrity unit found the exchange was consensual, but it also learned that Paine had sent an image of his penis to the woman.

Game over. That’s the point when then chief executive James Sutherland or the board should have played the tape forward and understood the ramifications of a story about the captain of the Australian cricket team firing off a dick pic and what that would do to the sport’s reputation.

Keep Paine in the team if he’s the best keeper-batsman available. But don’t present him as the fresh new face of the Australian team, about being a man of “character”, knowing the tawdry details of a dalliance outside his marriage could erupt at any moment.

Officials have been wary to appoint Pat Cummins as captain because he’s a fast bowler, concerned about his workload. That seems less risky than an explosive scandal on the eve of a home Ashes series.

People argue the Paine scandal is not a scandal at all. That it’s nobody’s business. That we’ve all got skeletons in the closet. That the exchange was consensual. That the media is to blame for reporting it, although let’s make this clear: while several outlets have known about the story for three years, it was the Herald-Sun that decided to run it.

We’ve all got skeletons in the closet. Some of us have warehouses full of them. They were put there years ago and don’t deserve to be dragged into the light.

But when you occupy the highest office in Australian sports and have taken over at a delicate time when the national team’s reputation has just touched rock-bottom, your reputation needs to be squeaky clean.

It was never Paine’s responsibility to stand himself down from the captaincy, though. That difficult decision rested with the people who ran the game then, and even now.

The war-of-words between former chairman David Peever and current chairman Richard Freudenstein shines a light on the mindset of those who run Australian cricket.

For a highly regarded media executive who was the former CEO of Foxtel, News Digital Media and The Australian, Freudenstein spoke like an amateur when he fronted a press conference on Saturday afternoon.

Most laughable was his claim that “background checks” would be done on captaincy candidates from now on to avoid the Paine situation. Come again? Everyone at CA, including Freudenstein, knew about the ticking time bomb.

Freudenstein said his board would have taken the captaincy off Paine, seemingly ignoring the fact that two current directors, John Harnden and Michelle Tredenick, were on the board at the time. Presumably, their positions are no longer tenable.

On Sunday, Peever hit back at Freudenstein via an angrily worded statement to selected media, accusing the current regime of “abandoning” Paine and not showing him enough “loyalty”.

The Australian Test team is often described as being a team of individuals. Evidently, that also applies to self-serving people who run it, especially so when they’re trying to cover their broad arses.

Meanwhile, narratives are being spun all over the place, trying to limit the damage.

Most administrators, in all sports, nefariously paint “the woman” involved in these controversies as crazed and cash-mad, but I have to say I’ve never seen a governing body do it via media statement.

It was a low blow, a terrible example of victim-shaming if ever there was one. The woman involved is said to be devastated the story came out and has subsequently left Tasmania.

Paine and his wife, Bonnie, participated in a raw and lengthy interview with the very masthead that dragged their particular skeleton out of the closet.

It was a strategic attempt to stop the avalanche of stories about him. Good luck with that. The news cycle tends to wear itself out on its own accord, especially with a story as salacious as this.

Surely, CA understands this better than anyone. After the ball-tampering scandal in 2018, it rushed through a two-day investigation, speaking to players and six staff but only about the events in Cape Town.

Cameron Bancroft, Steve Smith and Dave Warner were promptly thrown under the bus but the stench of a wider conspiracy, that others knew, continues to linger.

The presumption is Warner will let that particular cat out of the bag when he retires in a tell-all book. He may not.

And what will CA learn from it if and when that happens? Not much.