After ‘crazy’ 2019 final, Medvedev aims to rewrite his US Open story

New York: When Daniil Medvedev reached his first US Open final in 2019, he lost a gruelling five-set match against Rafael Nadal after what he called a “crazy” tournament, including a feud with the New York crowd.

But this time, he said on Saturday (AEST) after his 6-4, 7-5, 6-2 demolition of Canadian Felix Auger-Aliassime in the semi-finals, everything is different – starting with his desire to win.

The 2019 runner-up looked rock-solid at the start, firing off seven aces and never facing a break point in the first set, where he had just five unforced errors and broke Auger-Aliassime’s serve in straight points in the seventh game.

Down a break in the next set, Medvedev looked like he might be in trouble but Auger-Aliassime twice failed to clinch on set point in the ninth game and Medvedev broke his serve.

A double fault from Auger-Aliassime in the 11th game – one of 10 across the entire match – helped Medvedev to another break before the Russian ran away with the momentum into the third set, where he dropped just one first-serve point.

The world No.2 has carved a comfortable path through the draw to reach his third major final, dropping only a single set in six matches and wrapping up his win over Auger-Aliassime in a brisk two hours and four minutes. 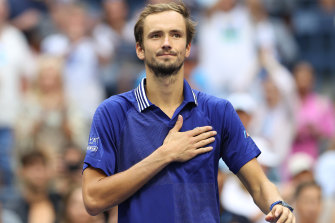 “Let’s be honest, I was already happy being in the final,” the Russian said of the 2019 tournament. “I was not feeling like it’s a must to win.”

His 2019 US Open was far more eventful. He said he endured severe cramping in his second-round match and suffered a tear in his quadriceps during a win over Stan Wawrinka.

More memorably, he earned the enmity of the fans during a third-round match, when he angrily snatched a towel from a ball person and then showed the crowd his middle finger.

But his subsequent apology, and his riveting performance in the final after dropping the first two sets, turned him from villain to hero.

“This year I didn’t have the stories, and that’s a good thing,” Medvedev said.

The 25-year-old is still searching for his first major title after losing to Novak Djokovic in the Australian Open final earlier this year.