Australian doctor fears the worst for Novak Djokovic after injury 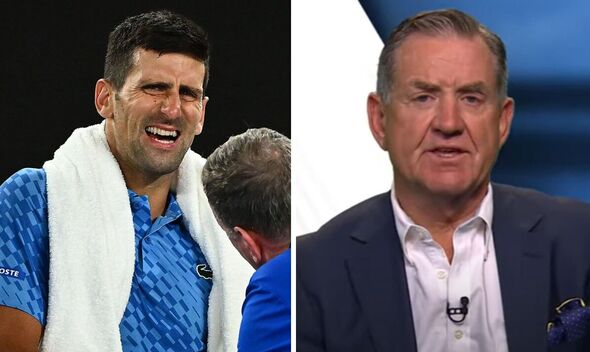 Novak Djokovic is just “one lunge away” from suffering a serious injury at the Australian Open with Dr Peter Larkins fearing the Serbian is also suffering from nerve damage in his back. The nine-time Australian Open champion came into the tournament not knowing how long he would be able to compete due to a hamstring issue he picked up earlier in the month.

His opening matches in the tournament saw Djokovic need to take medical timeouts and looked in serious pain at some points. But he looked pain-free during his demolition job against Alex de Minaur in the fourth round, sparking some questions on how severe the injury actually is.

De Minaur appeared to raise his suspicions after the match on whether the former world No 1 was injured at all, which sparked a response from Djokovic. He said: “Only my injuries are questioned. When some other players are injured, then they are the victims, but when it is me, I am faking it.

“I don’t feel that I need to prove anything to anyone.” Dr Larkins has no doubts that Djokovic has been carrying an issue throughout the tournament having watched his movement closely.

The Australian doctor has given his own diagnosis and insists Djokovic’s body is currently going through extreme pressure in trying to get him through the entire tournament. “If you watch it quite closely he really does a lot of stuff off the right leg and he gets his left leg off the ground quickly,” he told the Herald Sun.

“But the bottom line is it’s not a structural injury. It’s probably some nerve-related pain. He was hitting really powerful shots to not allow Alex to run him around too much, which meant he was making sure he stayed mid-court as much as possible.

“It’s not a structural or torn hamstring but he’s getting hamstring pain. That’s why they anti-inflammatories work, the strapping reminds him to be careful.” He added: “When you’ve got nerve pain that might be coming from the nerve in the hamstring or dare I say even his back, then… it’s not going to get better as the tournament goes deeper.

“In fact, the risk gets higher because fatigue comes in and arguably the players he’s playing are going to test him out a bit more. It’s different if he had a little strain and a week goes by and it’s gradually healing with physio.

“This is more a pain management issue rather than a healing issue and they are obviously managing the pain really well, because I think he’s adapted his game. If he has a tight hamstring and some neural pain, it’s only one stretch or one lunge away from becoming a tear if it’s tight.”