Back to normal? Barty endures two-day flight in return to travel circuit

Most tennis players are accustomed to long-haul flights and almost non-stop travel but world No.1 Ash Barty had to admit her near-50-hour flight to Florida to begin her title defence at the Miami Open this week was a bit jarring.

Barty has spent the last year in Australia, mostly due to the COVID-19 pandemic, and Miami will be her first tournament abroad since February 2020. 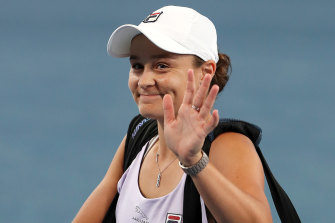 Ash Barty had to take the long way to Florida.Credit:Getty Images

“Tough playing tennis after traveling again. Quite a while since I’ve done that,” said Barty, 24, who added that a pair of cancellations created “quite a wriggle around”.

“I’m looking forward to feeling good in another day’s time and we’ll be ready to go.”

Barty, who was knocked out in the Australian Open quarter-finals last month by Czech Karolina Muchova, is among the players who elected to stay close to home as the world of tennis trudged onward amid the global pandemic last year.

Like world No.3 Romanian Simona Halep, who is also set to compete in Miami, Barty opted out of the US Open last year due to health and safety concerns.

Now she is mounting her title defence in Miami ahead of what she hopes could be a long stretch on the road, facing a field stacked with top talent including Halep and four-time grand slam winner Naomi Osaka.

“When leaving Australia, it was quite hard to leave and quite emotional to me. But I think we’re excited to have the opportunity to play the whole season,” said Barty.

“We can’t plan too far ahead. As we know, everything can still change so rapidly.

“But we’re planning as best as we can and just preparing for some changes. We had to be fluid with some of our decisions, but we’re looking forward to it.”