World No.1 Ash Barty was plagued by unforced errors but displayed plenty of fight on her return to the WTA Tour as she rallied from a set down to beat American Coco Gauff 4-6, 7-5, 6-1 at the Adelaide International on Wednesday.

Barty, the 2020 Adelaide champion, last played competitively at the US Open in September before heading home to Australia. She appeared rusty at times before mounting a brilliant comeback to reach the quarter-finals. 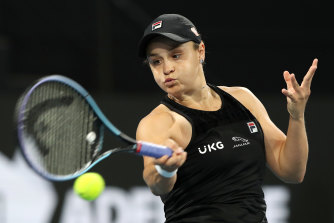 Ashleigh Barty in action against Coco Gauff at the Adelaide International.Credit:Getty Images

A delicate drop shot from the baseline helped Gauff break for a 2-1 lead in the opening set. The 17-year-old failed to build on the early advantage, but she capitalised on a number of loose errors by Barty to close out the set.

Barty saved four breakpoints in the opening game of the next set before world No.22 Gauff sealed a break to go up 4-2, but the local favourite clawed her way back to force a decider.

She raced ahead 5-1 after a scrappy start to the final set and completed the victory with a powerful volley.

World No.2 Sabalenka, a semi-finalist at last year’s Wimbledon and US Open, struggled on serve, making 18 double faults, and committed 49 unforced errors.

Juvan won a tight first set after trailing 2-0 and saved a set point at 6-5 in the tiebreak, before racing ahead 3-0 in the second to storm to victory in an hour and a half.

Rogers beat Sakkari in straight sets in the second round at Wimbledon last year and looked on course for a repeat, but lost seven straight games after being 2-0 up in the second set.

World No.6 six Sakkari forced the decider, but Rogers hit back to close out the win and set up a clash with seventh seed Elena Rybakina, who secured a 6-3, 6-4 victory over Czech qualifier Marie Bouzkova.