Barty pushed by Romanian, but victorious after long lay-off

Australia’s world No.1 Ashleigh Barty has won her first competitive match in almost a year, beating Romania’s Ana Bogdan 6-3, 6-3 in the WTA Yarra Valley Classic at Melbourne Park on Tuesday.

Barty had played an exhibition match against Simona Halep in Adelaide last week and lost, and was forced to earn every point early against the Romanian world No.93 on Margaret Court Arena.

But the 2019 French Open champion broke her opponent in the seventh game of the first set, and then broke easily again two games later to win the first set 6-3. 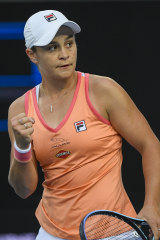 The 24-year-old then broke Bogdan again in the sixth game of the second set, although the Romanian was putting up a dogged fight, one that will do Barty a lot of good given her long lay off from the sport.

Indeed, the scoreline looks like Barty won in a canter, but she was forced to work quite hard through the whole match.

There were cobwebs too, with Barty double-faulting twice in the final game of the match, and once on match point.

The Italian Giorgi retired hurt after the first set which she lost 7-5 due to a leg injury.

“I started off pretty good obviously, just made a little bit too many unforced errors.

“Overall I’m happy with the way I played.”

Kenin’s Australian Open win was her first grand slam triumph, in a year that saw her also make the French Open final.

Osaka said she had to overcome nerves to win the match.

“Even until the very last point, I think I was just thinking – I don’t know, the first match you come back and especially in a Grand Slam environment, it’s definitely very hard.”