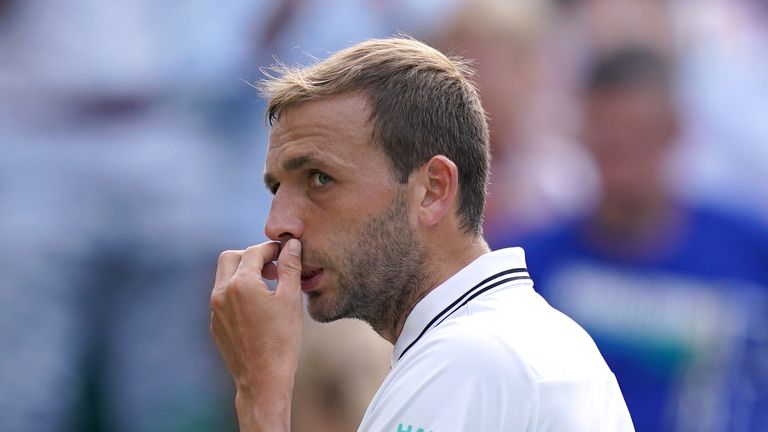 Dan Evans was beaten in straight sets at the Citi Open in Washington on his return to action after contracting Covid-19.

The British No 1, back on court for the first time since losing in the third round at Wimbledon last month, fell in his opening match to Brandon Nakashima.

Nakashima, who turned 20 on Tuesday, took the first set following a one-sided tie-break.

Sixth seed Evans, 31, then failed to win a single game in the second set as his American opponent completed a 7-6 (1) 6-0 victory in one hour and 29 minutes.

Evans withdrew from the Tokyo Olympics after he tested positive for coronavirus, and said he would “not be able to prepare and get myself ready” for the Games.

The in-form Nakashima will next play fellow American Denis Kudla after the world number 103 secured a surprise 6-4 6-2 victory against 10th seed Taylor Fritz.

There was also a shock win for another American on Wednesday after Steve Johnson came from a set down to beat third seed Alex De Minaur 6-7 (5) 6-4 6-2.

Top seed Rafael Nadal had a major scare but survived narrowly in an epic three-set second round encounter against American Jack Sock. The world No 3 was down a break to the 192nd-ranked Sock in the third set but clawed back to prevail by comfortably taking a third set tiebreaker, winning 6-2 4-6 7-6 (1). Nadal will next play 14th-seeded South African Lloyd Harris, who led 6-4 1-0 when his American opponent Tennys Sandgren was forced into an injury retirement.

Fourth seed Grigor Dimitrov of Bulgaria, however, suffered an upset loss, crashing out 6-2 7-6 (4) in his second round match against Belorussian Ilya Ivashka, who will meet American Mackenzie McDonald after his upset win over 13th-seeded Frenchman Benoit Paire, 6-7 (6) 6-4 6-4.

British seventh seed Cameron Norrie will play Kei Nishikori in the round of 16 after the Japanese veteran upset ninth seed Alexander Bublik of Kazakhstan 6-2 7-5.