How Pat Rafter and COVID moulded Duckworth into top-50 talent

After 11 years on tour, James Duckworth finished 2021 inside the world’s top 50 for the first time.

In a roundabout way, the Sydney right-hander has COVID-19 to thank for his rise from 103rd to 49th, as well as a maiden appearance in the third round of a grand slam, at Wimbledon.

A five-month break during the beginning of the pandemic allowed Duckworth to consult Pat Rafter about his eighth bout of surgery, on a shoulder injury.

Rafter recommended the same Melbourne surgeon who helped guide him through shoulder problems during his career, and Duckworth hasn’t looked back.

“Even when he was a junior, he suffered a couple of stress fractures and every time you get a stress fracture, it’s three to six months of rehab before you’re back to your best,” Tennis Australia director of performance Wally Masur said.

“Being healthy for an extended period is key, but he’s always been a really good worker. There are no shortcuts with his training or his rehab, he’s kept building and you know what they say – hard work has met opportunity.”

If it wasn’t for a torrid run with injury, Masur believes Duckworth would have reached the top 50 much sooner.

“For some players, you really have to work at your craft and be diligent every day,” Masur said. 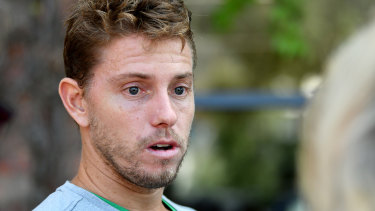 “He would have got here a little quicker, had it not been for injuries. Not just recently, but through his junior career.”

Duckworth also hired Wayne Arthurs as his coach and spent additional time at the AIS, a move which has paid dividends.

But the top 50 isn’t the ceiling for Duckworth, who will make his ATP Cup debut as Australia’s No.2 seed on Sunday.

“Again, it just comes down to being healthy,” Masur said.

“The way the slams are weighted, you have to do something in a slam. But is that possible for him? Yeah, absolutely.

“That’s where he has to strike. Fourth round, quarters of a slam. There you have it.”

Duckworth wasn’t close to the second Australian seed this time 12 months ago.

“I went home in the middle of the year after Miami and put in a really good training block with my coach, Wayne Arthurs, and just got really clear on my game style.

“It probably took a couple of months to gain some confidence, playing aggressively, and from that the results continued to improve.”

The perfect mix of a clean bill of health, Arthurs’ guidance, Duckworth’s work ethic and a shift in playing style has seen his career flourish.

Work ethic is the factor that stood out to Team Australia captain Lleyton Hewitt, who built a brilliant career on the back of exactly that.

“He’s always had setbacks throughout his career so far so for him to keep bouncing back and responding in the way he has is something we’re all extremely proud of,” Hewitt said.

“He does absolutely everything right in terms of his body and professionalism that he brings to the table every single day – on the practice court or the match court.

“It’s great he’s getting the success now and the body is holding up, as well, which is really important and such a big part of it.

“Now, for him, it’s really just cementing that spot in the top 50.

“Not putting too much pressure on himself but more so just keep trying to push and keep working on those things that he and Wayne have worked on.”