Look out, Wimbledon … the Special Ks are heading your way

Nick Kyrgios and Thanasi Kokkinakis are set to reprise their Australian Open-winning partnership at Wimbledon after committing to playing doubles together for just the fourth time this year.

The Australian duo claimed the trophy at Melbourne Park earlier in the year after beating four seeded pairs, including top seeds Nikola Mektic and Mate Pavic, on a fairytale run that was one of the highlights of the tournament.

Their matches became must-see events, with raucous crowds supporting their run of upset wins. The pair have had previous success at Wimbledon, teaming up to win the boys’ doubles title in 2013.

While both players count grass as their best surface, Kyrgios said after the Australian Open that he would not play doubles at Wimbledon as matches are played over five sets rather than the three played at other majors.

Earlier this month, Kokkinakis hinted that the chances of a Wimbledon reunion were increasing after both players took an extended break to rest their bodies before the grasscourt swing.

“There was a bit of hesitation… because it’s best of five and obviously both of us, especially me, have had some body issues,” he told the AO Show podcast. “So that was the only issue with playing doubles at Wimbledon, but I think we’ll give it a go.” 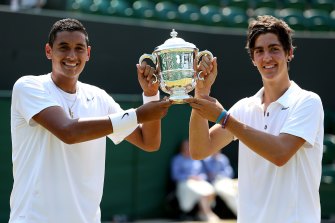 Kyrgios and Kokkinakis won the boys’ doubles at Wimbledon in 2013.Credit:AP

The pair played two tournaments together in the United States in March, which included a semi-final run in Miami.

Despite having played only three tournaments together, Kyrgios and Kokkinakis are still ranked No.4 on the ATP doubles rankings. They will be the 11th seeds at Wimbledon.

Kokkinakis teamed up with Kazakhstan’s Alexander Bublik at the French Open after Kyrgios opted to skip the European claycourt season.

Kyrgios has made a stellar start to his grasscourt season in singles, reaching the semi-finals of Stuttgart and Halle, where he lost to Andy Murray and Hubert Hurkacz respectively.

Kokkinakis will play just one match on grass this season prior to Wimbledon after losing to Finnish qualifier Otto Virtanen at a challenger event in south-west London before pulling out of two tournaments due to a slight MCL sprain.

Kyrgios and Kokkinakis will be joined in the doubles field by seven other Australians, including Australian Open runners-up Max Purcell and Matthew Ebden, and doubles world No.16 John Peers.

Watch all the action from Wimbledon ad-free, live and on demand on Stan Sport, with matches streaming in 4K UHD from June 27. Coverage of selected matches commences on 9GEM from 6.30pm AEST each night.