She may be only 18, but Olivia Gadecki has already fallen in and out of love with tennis.

But her mental resilience and competitiveness were the assets that got her through a Valentine’s Day victory over reigning Australian Open champion Sofia Kenin.

With pre-season training buddy and new friend Ash Barty in the empty stands supporting her, Gadecki came from behind to beat Kenin in a WTA event at Melbourne Park. 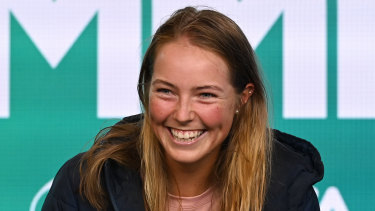 Olivia Gadecki was all smiles following her win over Sofia Kenin on Sunday. Credit:Vince Caligiuri

Gadecki – who has an official WTA ranking of 727 – gave up on tennis a year ago when she was having difficulty juggling a heavy training load with high school studies.

“I really struggled to keep on top of my school and that led to affecting my tennis performance and my mental health,” Gadecki told reporters on Monday.

“I decided to take a break from tennis, concentrate on school and see how I go.”

But once school finished, Gadecki felt a void in her life. She missed the sport and she wanted to turn her childhood dream into a reality.

“I felt this weight off my shoulders and that’s when I really thought that I may as well give this a red hot go, otherwise I might regret it,” she said.

She said her competitive spirit, helped by the fact she grew up with five brothers (and two half-sisters), was what got her over the line against Kenin.

Kenin was unceremoniously dumped out of the Australian Open in just the second round when she was beaten in straight sets by Kaia Kanep. Kenin broke down in tears after the game, telling reporters she failed to handle the pressure of being a defending champion.

When Gadecki found out she’d be playing Kenin in a round of 32 match in the Phillip Island Trophy, she used it as motivation. 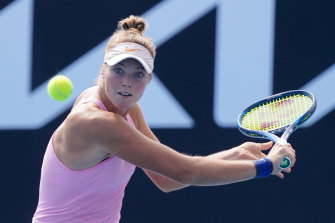 “I thought I had an advantage on her mental state. A lot of people were telling me she was a bit down and I really wanted to take advantage of that,” she said.

“If I just stayed tough and competed until the end I thought that I’d have a chance.

“Tennis is a very up and down sport, we’re one of the few sports that play all year around. We’re always on the road, it’s very individual.

“You’re going to have ups and downs. It just depends on how they deal with that. It does seem that she was in a bit of a down moment, I hope she’s OK.

“It is something that you do have to take advantage. At the end of the day, it’s a game.”

The Queenslander has several personal goals for the 2021 season, including being ranked inside the top 300. She also wants to make it to Wimbledon, although was wise enough to attach a classic COVID caveat: “if it goes ahead.”