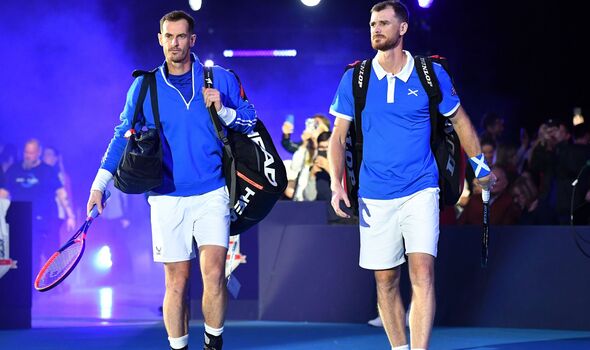 The Murray brothers finished off the Battle of Britain with a doubles victory in what could be their final swansong on a court together. Despite Scotland having already been beaten by their English rivals in the exhibition event in Aberdeen, Andy and Jamie provided a fitting finale for an enthusiastic crowd by beating Dan Evans and Neal Skupski 6-3 6-4.

Earlier in the day, Evans had beaten the the three-time Grand Slam champion before Paul Jubb prevailed over Aidan McHugh, moving England into an unassailable 3-1 lead. But with Murray senior having hinted at retirement nearing this week, raising the prospect this would be his last bow with his brother, there still seemed plenty on the line in a frenetic start.

The Scots were broken in the opening game but the response was emphatic, with the Murray duo reeling off five games on the spin. But the pendulum swung again when Jamie failed to serve out the set, before Skupski held to keep the pressure on.

But it was Andy who then fashioned a set point on his serve, and it was Jamie who made no mistake with a volley chance at the net. And at the changeover, the crowd were entertained by the former world No 1 giving a live interview to the crowd, thanking them for their support.

But at 1-1 in the second set, the icon was rolling back the years, producing a sublime backhand return winner to convert a break point. And when James cemented the break, the English duo’s hopes appeared to be hanging by a thread.

However, at 3-2 down, a blistering Skupski return set up two break points, only for the same player to put a forehand wastefully wide. And the brothers duly got out of a tight spot as another sharp volley from Jamie moved them to within two games of victory.

DON’T MISS:
Nick Kyrgios ‘not looking forward’ to Australian Open and vows to retire if he wins it
Rafael Nadal addresses retirement fears as fans urged to ‘enjoy while it lasts’
Jurgen Klopp discloses Boris Becker ‘risk’ as Liverpool boss was banned from prison visits

Evans held to bring a smile to the face of celebrity manager Ian Holloway, whose pairing then had an opening on Jamie’s serve when he double faulted. But after a deuce, a smash from Andy sealed another hold.

And on Skupski’s serve, a botched volley from Evans handed the brothers two match points. They couldn’t take them, but in the next game Andy served things out to send the crowd into raptures.