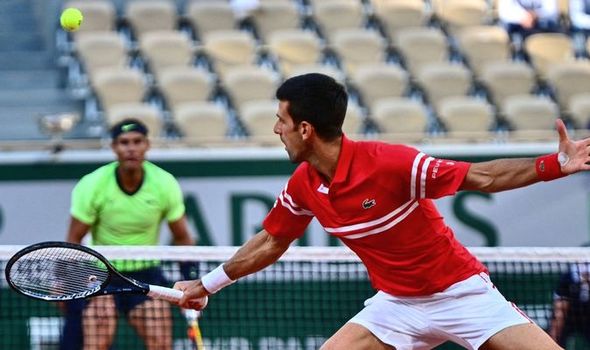 Fans watching Novak Djokovic and Rafael Nadal’s French Open semi-final were allowed to remain beyond the local curfew following a dramatic U-turn by the local authorities.

Djokovic had just taken the lead by two sets to one when an announcement was made that people inside must leave the Philippe-Chatrier court at Roland Garros.

Supporters booed and jeered the decision and appeared to refuse to leave. Djokovic had taken the decision to head back to the locker room, while Nadal remained seated on court.

It was a repeat of the scenes from Djokovic’s quarter-final tie against Matteo Berrettini. Attendees had also been told to depart due to the local 11pm curfew in Paris.

Then, both players headed off court until fans left the venue. One viewer even needed stewards to convince him that he must go.

However, in a stunning U-turn, it was then announced that fans could remain to watch the end of the match between Djokovic and Nadal.

A Roland Garros statement said: “In agreement with the public authorities, the match will be able to go to its end with the spectators, it is a tolerance granted given the quite exceptional nature of the circumstances.”

The decision was met by a huge cheer from those in attendance, who had witnessed a stunning match of tennis.

It was a remarkable turnaround from the Serbian, who had trailed 5-0 in the first set before embarking on a mini revival.

Nadal eventually won the first set 6-3 after just about holding off pressure from the World No. 1.

Djokovic then stormed back into the match. He won the second set 6-3.

A stunning third set took several twists and turns – and everyone watching inside Philippe-Chatrier feared the announcement that would tell them to depart. Some had even decided to leave ahead of the 11pm curfew.

Both players broke each other in a tense third set which was far dissimilar to its predecessors.

Djokovic led 4-2 and appeared destined to take the lead but Nadal fought back.

A tiebreaker went in the former’s favour.

That was when an announcement was made over the tannoy to tell fans to depart.

Djokovic briskly headed for the locker room, in contrast to how he waited on court in his previous match before being told he had to go inside.

Some fans had already fumed about the decision to enforce a departure from such a sensational match, including two-times Wimbledon champion Andy Murray.

The former British No. 1 tweeted: “Can’t believe this match is going to finish with zero crowd. Why does tennis do this to itself?”

But then French authorities waived the curfew and fans remained.

The winner of the Djokovic-Nadal final will play Stefanos Tsitsipas in the final.

We’ll be bringing you the very latest updates, pictures and video on this breaking news story.
For the latest news and breaking news visit: express.co.uk/sport/football
Stay up to date with all the big headlines, pictures, analysis, opinion and video on the stories that matter to you.
Follow us on Twitter @DExpress_Sport – the official Daily Express & Express.co.uk Twitter account – providing real news in real time.
We’re also on Facebook @DailyExpressSport – offering your must-see news, features, videos and pictures throughout the day to like, comment and share from the Daily Express, Sunday Express and Express.co.uk.