Novak Djokovic’s show of anger in smashing his racket during the Australian Open quarter-final against Alexander Zverev hasn’t gone down well with some of the viewers. Djokovic had cut a calm figure throughout the match despite going down a set at the start in a close tiebreak.

The world No 1 immediately bounced back, taking just under 30 minutes to draw level at 1-1.

The third set was going to be decisive in which way the momentum swung and Zverev struck first to go a break up.

Djokovic still looked focused as he attempted to claw his way back and had a chance to break back in the fifth game.

But he let the opportunity slip as Zverev held his nerve and Djokovic retaliated in spectaulr fashion. 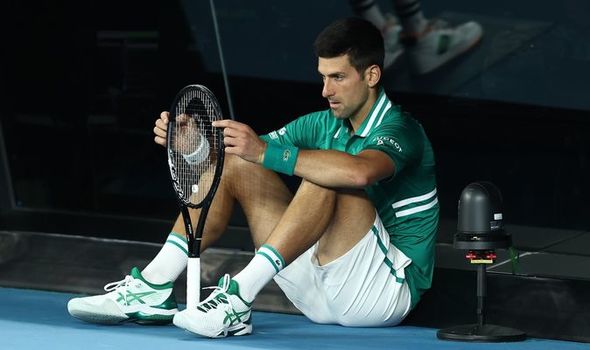 As his poor return dropped into the net, Djokovic turned away and screamed in anger before taking his rage out on his racket.

The Serbian made sure that his racket was completely unusable as he repatedly bashed it against the floor before walking solemnly over to his chair to pick up a new one.

Djokovic also asked to have the mess cleared up before returning to his spot at the back of the court.

And some viewers were far from impressed from seeing Djokovic lose his cool.

Another posted: “Not sure smashing your racket on the floor like that would help a side injury?!”

A third said: “Djokovic looks so disinterested sometimes from his looks and then breaks the racket all of a sudden.”

A fourth tweeted: “Djokovic smashing his racket into the court because he’s losing is quality TV.”

That missed opportunity to break Zverev saw Djokovic go 4-1 down in the third set and looked on course to lose his nerve altogether.

But Djokovic’s fit of rage clearly helped him as the world No 1 took his game to another level to win the next five games and take the set in tremendous fashion.

The winner of this contest takes on qualifier Aslan Karatsev, who defeated Grigor Dimitrov in four sets earlier in the day.