It will be the second match on clay against the Spaniard in a manner of weeks for 21-year-old Popyrin, who lost to him in the round of 16 at the Madrid Open. 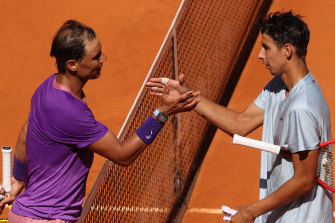 In an otherwise uneventful draw for the Australian contingent in Paris, world No.1 and 2019 champion Ashleigh Barty meets American Bernarda Pera first, while wildcard Astra Sharma – winner of a WTA event this year – has drawn a qualifier.

The draw for the 2021 version of Roland-Garros, back to its usual spring timeslot after moving to autumn last year due to the coronavirus pandemic, threw up a twist with Nadal, Novak Djokovic and Roger Federer all in the same half.

According to the International Tennis Federation, it’s the first time that has happened for the distinguished trio, winners of nearly 60 major titles between them.

Nadal beat Djokovic in straight sets in the 2020 final for his record-extending 13th championship.

Djokovic is seeded No.1, and Nadal is seeded No.3 — the seedings adhere strictly to the ATP rankings, so the Spaniard’s unprecedented previous success in Paris is irrelevant.

The only certainties before the draw were that Djokovic would be on one side and No.2 Daniil Medvedev on the other; Nadal and No.4 Dominic Thiem were randomly placed and could have shown up in either half.

Federer, whose record for most weeks at No.1 in the ATP rankings recently was broken by Djokovic, turns 40 in August.

The Swiss legend is ranked No.8 after playing only three matches over the past 15 months because of two operations on his right knee. He could meet Djokovic in the quarter-finals.

Medvedev is a two-time grand slam finalist but is 0-4 for his French Open career. Thiem won last year’s US Open and twice has been the runner-up in Paris.

Serena Williams, who has won three of her professional-era record 23 grand slam titles in Paris, is in a quarter of the women’s draw filled with familiar faces.

That includes possible match-ups with three-time major champion Angelique Kerber in the third round, two-time Wimbledon champion Petra Kvitova in the fourth, then either two-time Australian Open champion Victoria Azarenka or No.3 seed Aryna Sabalenka in the quarter-finals.

Other possible women’s quarter-finals are: No.1 Ash Barty v No.5 Elina Svitolina, No.4 Sofia Kenin v No.8 Iga Swiatek in what would be a rematch of the 2020 final won by Swiatek, and No.2 Naomi Osaka v No.6 Bianca Andreescu.

Four-time major champion Osaka announced on Twitter this week that she would not be doing news conferences during the French Open.

A year after withdrawing from Roland-Garros before the second round because of an injured left Achilles, Williams will face 74th-ranked Irina-Camelia Begu of Romania first. They met once before, with Williams winning, on clay in Rome in 2016, the year Begu reached the fourth round in Paris for the deepest French Open run of her career.