Former Australian tennis star Sam Groth has taken aim at Novak Djokovic, accusing him of “laughing in the face of Victorians” as current players carefully side-stepped the debate around the decision to hand the world No.1 a medical exemption to play in the Australian Open.

Groth spoke for the significant portion of the Australian public who are enraged that Djokovic has been cleared to play, saying it was a “brazen move” for the 20-time grand slam winner to reveal that information himself via his social media channels without offering a more detailed explanation. 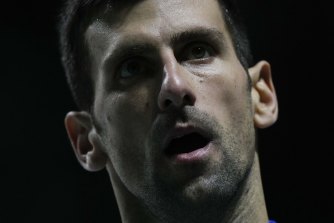 World No.1 Novak Djokovic is on his way to Australia.Credit:AP

“I still think Djokovic is one of the greatest ever but with greatness comes expectation and he fails every time. He is failing his peers and laughing in the face of Victorians,” Groth, who is currently in isolation after testing positive for COVID-19, wrote in a column for News Corp.

“He was here last year lifting the trophy and paying tribute to what Victorians in particular had endured. He played in empty stadiums during the snap lockdown. His announcement on Tuesday was tone-deaf. He should know better.” 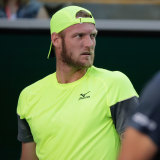 Sam Groth says Novak Djokovic’s announcement of his medical exemption to play in the Australian Open was “tone deaf”.Credit:Alex Ellinghausen

Djokovic’s exemption was the talk of the country on Wednesday, but most tennis players did their best to avoid the subject – or at least kept their opinions to themselves.

“I don’t want to say what I think,” said Argentina’s world No.13 Diego Schwarzman, who lost 6-1 6-4 to Poland’s Hubert Hurkacz in the ATP Cup in Sydney on Wednesday.

“The players, we already spoke in the locker room. That is what I said. Maybe the press is going to be in the locker room for sure in the next few weeks, but I think we don’t have to say nothing. I mean, we are here to play and Novak already talked to the tournament, the government, everyone is talking about, so players, we have to be on the side, I think.”

Sam Stosur, whose attention is shifting to her final Australian Open campaign after falling 7-6, 7-6 to Chinese qualifier Zhu Lin in the first round of the Summer Set at Melbourne Park, said it wasn’t fair to blame tennis authorities for letting Djokovic in.

“As far as the exemption goes, I don’t obviously have any idea what the exemption is for, what it was. I know I don’t think it comes down to the tennis circles and the Australian Open deciding those – it’s the government,” she said. “So whatever application has been sent in, they’ve obviously given it the okay. It’s obviously a pretty heated topic at the moment, and hopefully it’s all fine in the long run.”

Fellow Aussie Jordan Thompson was pleased Djokovic would be playing in Melbourne, and said his own brush with COVID-19 before vaccination has not changed his opinion on whether athletes should be forced to take the jab.

Thompson lost his spot in Australia’s Davis Cup team due to his battle with the illness last year and has since been vaccinated.

“The only thing that I know is that he got the exemption, and I think it’s good that he’s playing here. That’s all I can really say,” said Thompson after beating practice partner Chris O’Connell 1-6 7-5 6-4 at Melbourne Park.

“I know that we’re big on vaccination in Australia, and yeah, I haven’t really had much to say. I’m happy he’s playing. I think it should be the choice of the person whether they want to get the vaccination.

“It’s a difficult one. I can see why people are angry. But to me, honestly, I don’t really give a shit. I just think people should have their say if they want to get vaccinated or not.”

Tennis Australia, meanwhile, has refused to elaborate any further on the reasons behind Djokovic’s absence from the ATP Cup after he withdrew from the tournament last week. The Herald and The Age were directed back to TA’s original press release, which gives no detail around Djokovic’s withdrawal, after making follow-up inquiries.

Team Serbia, who Djokovic was supposed to lead in Sydney, were due to play their final Group A tie against Spain in the ATP Cup on Wednesday evening.

Poland became the first team to book their spot in the semi-finals on Wednesday, beating Argentina to confirm top spot in Group C.