The men’s and women’s world tours and the three remaining grand slams are unlikely to go ahead this year because of the global nature of the sport, Tennis Australia chief executive Craig Tiley believes.

Wimbledon is the latest casualty on the sporting calendar, with the All England Club expected to announce its cancellation for the first time since 1945 following a board meeting on Wednesday.
French Open organisers had already moved the clay court major to September and October, starting a week after the US Open and controversially clashing with the Laver Cup men’s team event in Boston. 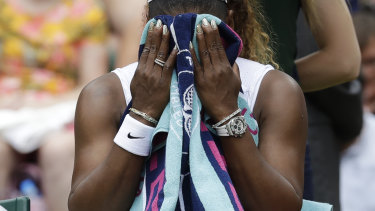 Serena Williams and the rest of tennis’ galaxy of stars may not be seen on court again this year.Credit:AP

However, that scheduling double-up may ultimately become irrelevant if, as Tiley fears, the season is lost completely to the coronavirus pandemic.

“My personal view is I think for tennis to come back this year is going to be tough,” he told The Sydney Morning Herald and The Age on Monday.

TA staff have had working weeks reduced to cut costs after a full-day meeting of the board on Friday. Executives are war gaming all scenarios, including next year’s Australian Open, set down for January 18-31, being affected by COVID-19 and the financial implications of that.

“We’re looking at that right now,” Tiley said. “But we’re planning running the AO 2021 and planning on having a great season.

“We’ve got to plan for the worst and hope for the best. Tomorrow morning we [could] wake up and there is some miracle cure or some concoction of drugs that really helps, or they’re on a path to a vaccine. [But] from all the literature you read, it doesn’t seem likely in the immediate future.

“What I want to do as an organisation [is] I want to plan for it being really difficult for people to be travelling this year from country to country. I think within the country will be fine. [When] you can travel globally is when tennis can come back, from a pro level. From a local level, we can start right away and that’s what we would be focused on at the beginning.”

Tiley said there were "deep conversations" going on in an attempt to resolve the scheduling dispute that has emerged from Roland Garros plonking itself in the middle of the northern autumn.

TA is a partner in the Laver Cup along with the United States Tennis Association and the ATP and it has become a popular event with players such as Australia's Nick Kyrgios since it launched four years ago.

The cancellation of Wimbledon was forecast, meanwhile, by German Tennis Federation vice-president Dirk Hordorff, who said it was "unthinkable" to stage such a large international event in the midst of such a crisis and it would be called off this week. Wimbledon was due to run from June 29 to July 12.