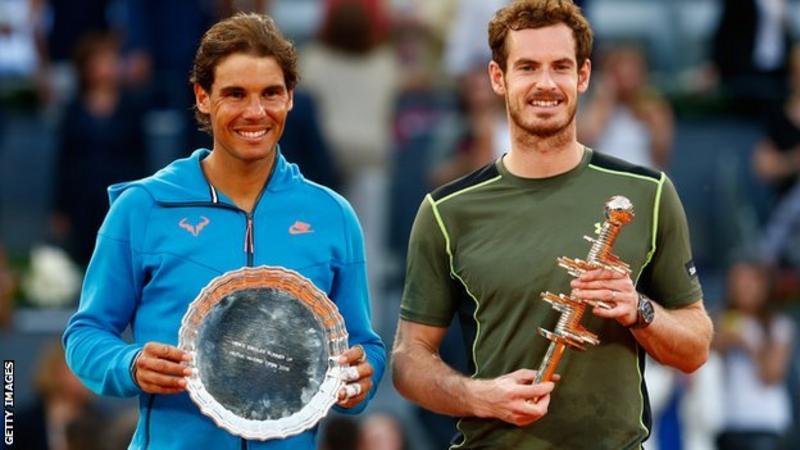 When Rafael Nadal claimed during an Instagram chat with Andy Murray that he had only begun preparing that day for the upcoming virtual Madrid Open, both men broke into laughter.

“Feliciano Lopez told me you have been practising for three or four hours a day,” joked Murray.

Given their competitive spirit, it is easy to imagine both have spent more than a few lockdown hours glued to a PlayStation since last Monday’s chat.

With tennis suspended until at least mid-July because of the coronavirus pandemic, Nadal and Murray are among 32 of the world’s leading ATP and WTA players replacing the buzz of competitive action with an online fix.

This week they are swapping their racquets for PlayStation 4 controllers, to play on the Tennis World Tour video game for the Madrid Open Virtual Pro titles.

There will be 16 men, 16 women, two knockout singles tournaments – all played in a digital representation of the Spanish capital’s Manolo Santana Stadium.

It is the first time a virtual tennis tournament has been contested solely by professional tour players. The event will be streamed on the Madrid Open’s Facebook page and the platform’s new gaming app.

“This idea is based on two things: firstly, to give something to the fans while they are at home and let them watch their favourite players. And secondly, to help players who are struggling right now,” Lopez, the ATP tour veteran who became the Madrid Open tournament director last year, told BBC Sport.

Both tournaments have separate prize pots of 150,000 euros (£131,210). Each champion will decide how to distribute the money into the relief funds set up to support lower-ranked players whose incomes have dried up during the pandemic.

“Players individually can give their support and then there are initiatives like ours, where we are asking the players to give all the prize money to the fund,” added Lopez.

“There will be a lot of money in the funds to help the players struggling right now.” 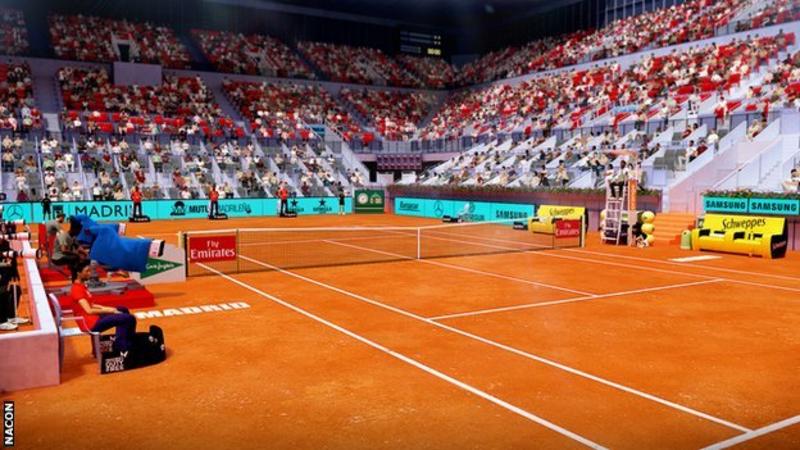 Who else is playing? Not Nick Kyrgios…

Behind star attractions Nadal and Murray, there are a host of other big names. Fellow Grand Slam champions Caroline Wozniacki and Bianca Andreescu compete in the women’s event, as does British number one Johanna Konta, while Australian Open runner-up Dominic Thiem and ATP World Tour champion Stefanos Tsitsipas are among the men.

The players will compete as their own Tennis World Tour characters, although some of the 32 entrants – including Murray – are not on the game. That is largely as a result of developers Nacon being unable to negotiate some image rights, which are done on an individual basis.

Murray’s character, therefore, has been added in the game’s player creation mode by the organisers, meaning the physical and technical attributes of the Scot might not be as closely representative as others.

Kiki Bertens, who should have been defending the WTA title in Madrid next week, is another whose character has been created for the tournament.

“It is more the skills from me than the skills of the character,” said the Dutch world number seven.

Bertens underlined her status as one of the best clay-courters on the women’s tour by winning last year’s Madrid Open – one of the leading WTA events outside of the Grand Slams and an important signpost towards the French Open – without dropping a set.

Instead of returning to the Caja Magica, she will be defending the title in her living room at home in Breda in the Netherlands.

“Winning last year was the biggest title of my career so I have such great memories from Madrid. I wanted to defend my title,” the 28-year-old told BBC Sport.

“Now I’m not sure if I will be able to, because I’d rather play a tennis match in Madrid than a computer game! But I’m practising hard and we will see how it goes.”

Lopez has been impressed with the buy-in from the leading players, although not everyone has been bowled over by the idea.

Nick Kyrgios, never shy of conveying what he thinks, reckons they should be playing Call of Duty, Fortnite or Fifa instead of Tennis World Tour so “people actually watch”.

Will it be competitive?

The demanding Lopez says this is “not only for fun”, any players thinking it is all a laugh might be shown up.

“We are trying to make the virtual tournament as professional as we can. We want this to be a competition,” he said.

The Spaniard arranged for PS4 consoles and copies of Tennis World Tour to be sent out to the players, allowing them to prepare for an event he wants them to take as seriously as the real thing.

“Even though it is virtual we want the players to compete like they usually would,” said the 38-year-old, who admits he is not a gamer himself.

“The message we want to send to the fans is that the players are competing online because they can’t compete on-site.”

Nadal and Murray arranged during their Instagram chat to have a match later that night, while Elina Svitolina and Eugenie Bouchard are among those to have posted clips of them practising.

“On court I scream a lot and show my emotions, but I think my competitive spirit will come out even more when I’m playing the game,” she laughed.

“It is hard not to let my emotions go. Once already the controller was almost flying across the room.”

Cameras with in-built microphones will follow their every move, meaning animated histrionics and trash-talking are not being discouraged.

Fans will see the players in the corners of their screen, allowing them to watch their interaction as well as the match.

“Entertaining the fans is very important so the interaction is something we really wanted to have,” Lopez said.

Will the technology work?

Last year’s Madrid Open was Lopez’s first as the tournament director and he hopes the virtual event will run as smoothly as that did.

While the long hours in the role haven’t changed, he has a new concern: dodgy internet connections.

Digital expert Webedia, a global entertainment company with expertise in esports, is responsible for the technical side.

Usually their events see a host of YouTubers and influencers competing, and have included a Fifa tournament held at Real Madrid’s Santiago Bernabeu stadium.

“We are in a new situation for everyone. We usually do events like these in a studio with everything connected and tested; we have back-ups in case something happens,” he told BBC Sport.

“Because of the situation we have to produce everything from home. Everyone involved in this project is in his or her house. That’s the most difficult thing.”

Smooth streaming of the players is key. Out-of-sync images and distorted sound are guaranteed to see exasperated viewers switch off.

Tests have been done on each player’s wifi speeds to ensure the live streaming, done through a popular gaming app called Discord, will work.

Fernandez says the gameplay will be streamed through a different server operated by publisher Nacon, meaning if a player’s camera connection goes down then fans will still see images of the PlayStation action.

“The technology is incredible and all we need is good wifi. We have done the tests and we’re confident it is not going to be a concern,” Lopez added.

Who will be the King and Queen of ‘Clay-Station’?

According to the pre-tournament chat in their WhatsApp group, there is not much gaming experience among the WTA players.

Presuming that is true and nobody is hiding considerable talent, it leaves an open field which mirrors the reality of unpredictable women’s tournaments on the tour.

“We all start from zero and it is a fair competition,” said Bertens, who had never played Tennis World Tour, or had a PlayStation, before last week’s delivery.

On the men’s side, Lopez is tipping his old doubles partner Murray for gaming glory.

Murray appears to have plenty of online pedigree, judging by an admission he used to spend “way too much” time on computer games earlier in his career. During their Instagram chat last Monday, Murray and Nadal reminisced about the late nights they used to spend playing Pro Evolution Soccer.

“Andy is one of the most competitive players in the game and I’m sure he will be one of the candidates to win this virtual event,” said Lopez. “He likes playing video games and he will have been practising.”

Gael Monfils was another of Lopez’s hot tips – before the French world number nine withdrew on the eve of the tournament.

Monfils, a known gamer who regularly showcases his skills on Twitch, said he could not play because of “conflicting rights between streaming platforms”. French compatriot Benoit Paire, who Monfils regularly spars with on Fifa 20, comes in as a virtual version of a lucky loser.

Perhaps his chances of dominating a virtual tournament on his favoured surface – and being crowned the King of ‘Clay-station’ on Thursday – have received a considerable boost.