Bernard Tomic labelled Australian tennis legend John Fitzgerald “the worst commentator I’ve seen in my life” after the latter questioned whether the former would return to next year’s Australian Open.

Tomic barely fired a shot in his second round, 6-1, 6-3, 6-2 loss to top Canadian hope Denis Shapovalov. 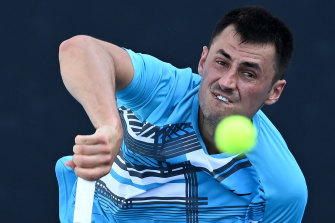 Tomic isn’t sure where tennis will take him next, although he will likely take part in an ATP 250 tournament in Singapore.

“I don’t know what I’ll do now. I would like to play some more tournaments, obviously, but we will see what’s the go,” he said.

The 11th seed was more concerned with some Hawk-Eye Live calls than he was with Tomic’s resistance, questioning calls to the chair umpire as late as the second last game of the third and final set.

Meanwhile, Stan Wawrinka blew an 8-4 lead and three match points in a match tie-breaker as he fell to Marton Fucsovics.

The second round exit equalled his worst result at the tournament he won in 2014.

It’s the fifth time the 35-year-old has failed to progress past the second round – an incredible statistic given he also reached the semi-finals in 2015 and 2017.

“Not the best level for me, but again, I was fighting, I had some chance to finish the match, I didn’t finish,” Wawrinka said.

“I hesitate a little bit when I had the match point and I lost it.

“Yeah, from 6-1 (in the match tie-breaker) I start to hesitate a little bit the way I was playing. I wanted to put the ball maybe too much in and I’m not going completely for my shot and that’s when I start to miss a little bit.

“It helped him to come back in the match. He was fighting well, he’s a tough player, he’s a good player and he deserved to win.”

Dominic Thiem also breezed through his second round match.

The No. 3 seed took just over 90 minutes to beat German Dominik Koepfer 6-4, 6-0, 6-2 and set up a clash with the winner of Nick Kyrgios’ match with Ugo Humbert.